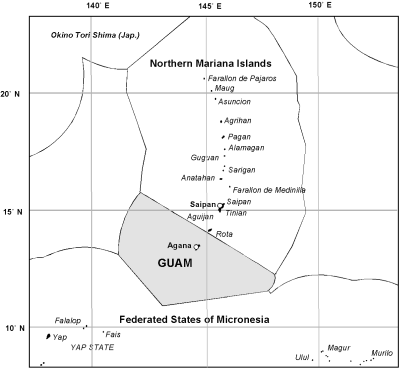 Guam has an exclusive economic zone (EEZ) of around 218,000 km2, while having a land area of around 541 km2. Guam’s EEZ borders two Pacific nations, the Federated States of Micronesia to the south and the Commonwealth of the Northern Mariana Islands to the north, with around 25 per cent of the EEZ bordering international waters.

(The original of this text was transferred, with the permission of SPC, from the original SPC technical report by Lindsay Chapman in 2004, and was compiled from interviews with island fishery managers and fishers. However, please feel free to make corrections to this Wikicity text if you have more accurate or more up-to-date information)

The development and management of the marine resources within Guam’s EEZ has been regulated by the U.S. Government over the last 50 years. Fisheries management is driven through the Western Pacific Regional Fisheries Management Council in response to the Magnusson-Stevens Fisheries Conservation and Management Act under the US Congress. However, the Government of Guam also claims legal jurisdiction under 1 Guam Code Annotated. The local government has also been working with U.S. Federal partners in develop a management plan that will allow the transfer of oversight of the natural resources and any revenue generated from activities within the EEZ to the Government of Guam.

Fisheries management of nearshore resources around Guam is conducted through the Western Pacific Regional Fisheries Management Council based in Honolulu, Hawaii. Through the Council, two fishery management plans have been implemented, one for the deep-water snapper resource and the other for pelagic species. These management plans cover Hawaii, and the three US territories of American Samoa, the Commonwealth of the Northern Mariana Islands and Guam.

This plan was implemented in August 1986 (Anon 1986) and has been amended nine times over the years to take account of changing circumstances in all or part of the fishery being covered. The plan has the following objectives:

The pelagic fishery management plan of the Western Pacific region

This plan was implemented in March 1987 and has been amended (WPRFMC 2003). The current objectives of the plan are as follows.

The following sections summarise the current status with background information on domestic development in the nearshore fisheries, in a range of areas. The main focus is on developments in the tuna fishery, both public and private sector, as this is where most effort has and is being directed. The tables provide a snapshot based on the information available at the time.

Deep-water snapper fishing is conducted on an ad hoc basis by around 180 small-scale vessels fishing around Guam.

Deep-water snapper data is available from 1979, when around 2 t of fish was recorded.

Fishery expanded in 1983 with 32 vessels reporting landing of around 14 t in total. Fleet expanded to 47 vessels in 1985, although the landings dropped to around 10 t. Further declines in 1986, with 38 vessels landing around 6 t. Note that these vessels only fished part-time for deep-water snappers.

Management plan implemented in August 86 by the National Marine Fisheries Service, which covered Guam, Hawaii, American Samoa and the Commonwealth of the Northern Mariana Islands.

In the late 1980s catches went up to around 15 t annually, with around 110 boats fishing

Main centre is the Guam Fishermen’s Cooperative, which most fishermen sell their fish.

Several other small vendors for fish around Guam.

Four private sector ice making facilities, 2 main ones where fishermen collect their ice and 2 smaller ones that deliver ice to the boat.

Local fishermen hire a crane to lift their vessel out to work on them.

Facilities available for repairs on all types of boats, wood, fibreglass, aluminium and steel.

FAD programmes and or deployments Edit

Currently 16 FADs on station around Guam up to 20 nm offshore in set locations approved by the Coast Guard.

Regular maintenance carried out on the FADs and lost FADs are generally replaced within 2 weeks.

As with deep-water snapper fishing, around 180 local small-scale vessel troll around the FADs and open water for tunas and other pelagics.

A few boats would also mid-water handline for tunas around FADs or off the corners of banks.

Around 20 to 30 boats full-time fishing, with trolling making up around 90% of their fishing time.

Trolling for tunas and other pelagics goes back a long way off Guam. In 1980 there were around 115 vessels operating, landing around 240 t of pelagics.

Management plan (pelagics) implemented in March 1987 by the National Marine Fisheries Service, which covered Guam, Hawaii, American Samoa and the Commonwealth of the Northern Mariana Islands.

No domestic medium-scale tuna fishing operations partly due to the fact that there is a 50 nm exclusion zone around Guam and that there is no export of domestically caught tunas.

Foreign vessels tranship their catch through Guam, but the fish is not taken in the Guam EEZ.

Management plan (pelagics) implemented in March 1987 by the National Marine Fisheries Service, which covered Guam, Hawaii, American Samoa and the Commonwealth of the Northern Mariana Islands.

Two US tuna longliners were licensed to fish Guam’s EEZ in 1991, although neither vessel actually fished.

No other records of domestic tuna longlining activity have been located.

Around 25 charter boats operation out of Guam, mainly to cater to the tourist trade, with trolling making up 90% of their charter activities.

No actual gamefishing club, although there is an annual international tournament plus 2 or 3 local derbies annually.

Charter operations have operated on Guam since the 1970s, mainly to cater to the needs of Japanese tourists.

During the 1980s and 1990s it was estimated that around 7% of the troll fleet were charter vessels. This equated to around 8 vessels in 1980 increasing to around 34 charter boats in 1996.

No baitfishing trials or activities undertaken at present.

The aquaculture of milkfish for live tuna longline bait has greatly reduced with only small quantities currently produced.

No other nearshore fishing methods being trialled or used at present

Retrieved from "https://fisherymanagement.fandom.com/wiki/Guam_(US)?oldid=382"
Community content is available under CC-BY-SA unless otherwise noted.